What is a Sclerotium?

While many fungi create spores sexually or asexually that may persist and overwinter in the soil, some fungi ensure their survival further by making specialized structures such as a sclerotium. In general, a sclerotium is composed of a hardened mass of mycelium covered by a “rind”. As denoted above, a sclerotium is used a means for the fungus to survive for a long period of time during harsh environmental conditions. Its contents provide food reserves that allow the sclerotium to germinate and release spores when conditions are favorable.

This fungal pathogen was found by one of the interns who specializes in ornamental horticulture while she was evaluating our petunia bed. Responsible for a condition called Crown Rot of Petunias, a brittle necrotic stem was the initial symptom that gave away this pathogen’s residence. When cut open, the stem revealed a couple of tiny sclerotia.

This disease starts when either a spore germinates on the foliage of the plant or hyphael strands enter the plant through its roots. At some point, during the time of the fungal infestation, the fungus produces its sclerotia (this logically is more likely to happen closer to the end of the season when survival is less guaranteed). Unless the infected tissue is removed, the sclerotia, at this point, are opportunistically positioned to germinate during the following season (or later seasons if the immediate one is non-conducive) and will either create active hyphae or give rise to apothecial fruiting bodies that release ascospores.  Because our plants were well established, the fungus failed to take down the whole petunia plant, yet for petunia victims that are young and lack lateral branches, this disease could be devastating. 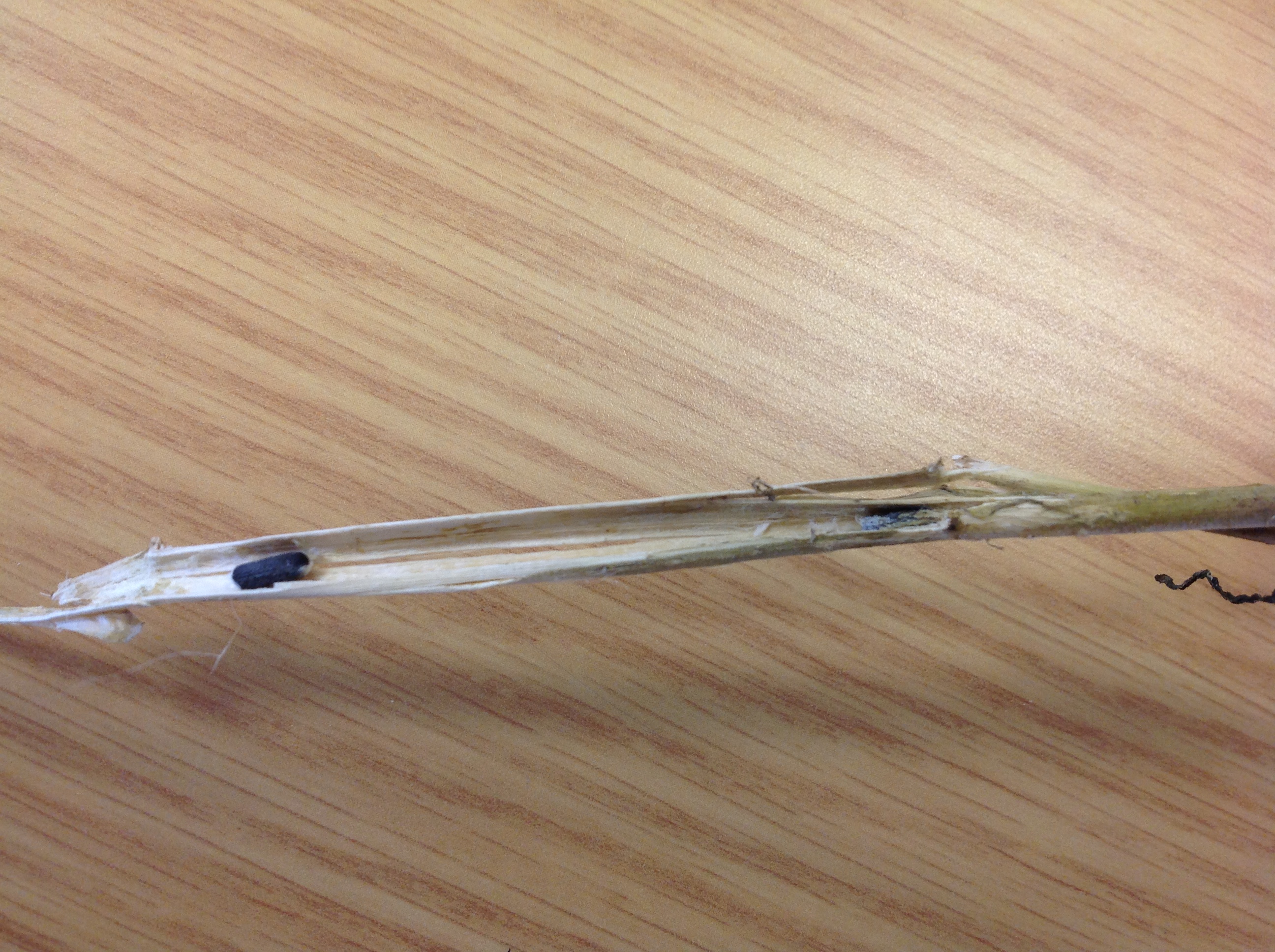 Want to learn more information about the effects that Crown Rot has on petunias? Click the link below to watch a video that goes into further detail about this fungus, its life cycle, how to control it, etc.:

Claviceps sp. of the Claviceptaceae:

I happened to come upon this fungus while observing plants in our Native Pollinator bed on the west end of the display garden. It was exciting to find these perfect specimens “blooming” from the panicle or head of the plant where seeds normally would be present. When diagnosed, this disease is referred to as “Ergot”. While the condition produced by this fungus should not be a worry to most home gardeners, species of claviceps are important to note because of the effect they have on cereal crops and the pathological conditions its sclerotia may have on human health if left unmonitored. When contaminated flour (usually rye) is produced from infected grains and a hazardous amount is consumed by a person, that person could take on a disease commonly known as Ergotism or St. Anthoney’s Fire. Essentially, the mycotoxins released from the sclerotia induce a halucinogenic state of madness in the victim. In addition to its psychological effects, it may induce muscular convulsions and gangrene which could lead to vasoconstrictions that ultimately could call for the amputation of digits or worse, limbs of the body. Because ergot is an agricultural disease and does not present itself as a big issue to the common horticulturalist, I will not go into much further detail about how to control it. Hopefully, this additional example of a sclerotia creating fungus has added some interesting trivia to your day!

Alas, I apologize, but I cannot resist telling you more about this pathogen! It is so fascinating! Below is a picture of sclerotia of Claviceps sp. that initially infected the ovaries of these grasses. It uses the plants vascular system to receive sugars so it can continue to develop until the sclerotium is fully mature. At this point, like the Sclerotiniaceae, the sclerotium may stay dormant for a long period of time until conditions become conducive to germination. When Claviceps sp. germinates, it produces a structure called a stroma, bearing ascospores that will continue its disease cycle. 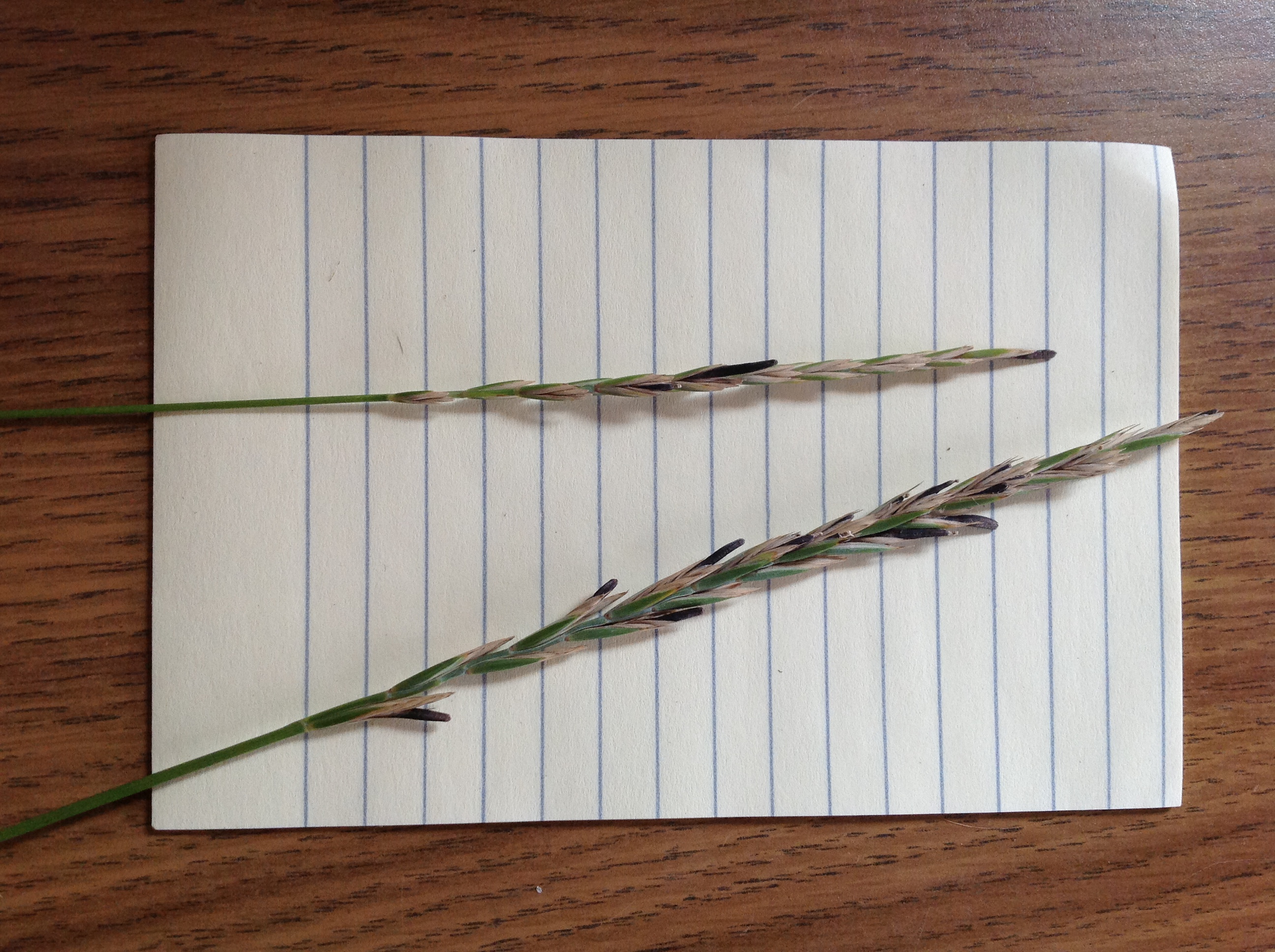