Hey insect fans! This week we’ll be talking about the Spotted Cucumber Beetle (Diabrotica undecimpunctata), a pest of cucurbit crops that made its first appearance in the gardens this past week. (pictured below – our apologies for the small picture, this guy was FAST) 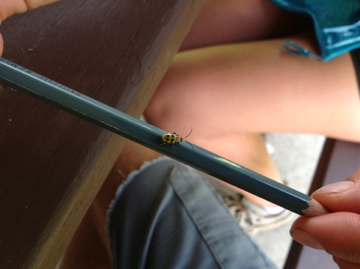 The Spotted Cucumber Beetle is a coleopteran pest of cucurbit crops, feeding on plants in this group during both the larval and adult stages of its life cycle. As a larvae, this insect feeds on roots and shoots of growing cucurbits. As an adult, it feeds on leaves, flowers, and fruit.

The primary damage caused by this insect is not its consumption of plant material, however. Cucumber beetles carry bacteria that cause vascular wilt, and transfer them to cucurbit crops through feeding damage and fecal contamination. Vascular wilt, once established in the plant, cannot be cured and quickly causes the infected plant to wilt and die. This bacterial disease plugs up vascular tissue inside plants, blocking the flow of water and nutrients. This  blockage is what causes the initial “wilty” appearance, and is ultimately the cause of death in the plant.

Because of the severity of the problem caused by vascular wilt, it is important to scout frequently for Spotted Cucumber Beetle if you are growing cucurbit crops. If you see wilted sections of vine, it is also wise to make sure that vascular wilt is to blame for the problem. To test for vascular wilt, slice the stem of the affected plant and hold the two ends together for a few seconds. After holding the two halves together, pull them slowly apart and look for a milky, viscous sap stretching between the two ends. If this  milky sap is present, the plant has vascular wilt.

Many chemical and cultural controls are available for the control of Spotted Cucumber Beetle, but they are very diverse and highly dependent on the situation. For this reason, we’re including the link to the UW Extension page on the cucumber beetle so that you can find more detailed information if needed. Here’s the hyperlink: http://www.google.com/url?sa=t&rct=j&q=&esrc=s&source=web&cd=2&ved=0CDAQFjAB&url=http%3A%2F%2Fadams.uwex.edu%2Ffiles%2F2013%2F05%2FCucumber-Beetles.pdf&ei=wlboUfOrKcO1rgGdr4DwCQ&usg=AFQjCNExHH0uA0QZlChftDBntDcdqZuORg&bvm=bv.49478099,d.aWM

Thanks much for reading! Tune in again next week!